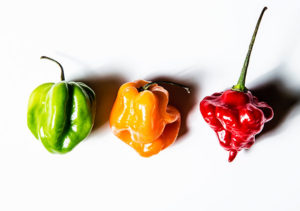 The Jamaican and the Caribbean’s Chili Of Choice

A Scotch bonnet pepper may sound timid, but it is nothing of the sort. It’s one of the spicier peppers (100,000 to 350,000 SHU, same as a habanero) that you may potentially find at a supermarket, especially in geographic areas high in Caribbean residents.

Why the Caribbean? Because this is THE pepper of the region. In fact if you say you want a hot pepper in Jamaica and most of the Caribbean islands, the Scotch bonnet pepper is what you are handed. Scotch bonnet is used in all sorts of Caribbean cuisine, including in our well-known Jerk chicken (or Jerk pork).

Where does the name Scotch bonnet come from?

The shape of this famous pepper is what inspired its name. In shape, the pepper with its squashed look appears like a Scotsman’s bonnet (called a Tam o’Shanter hat). Simple as that. Nothing else Scotch about this pepper, but it does have a name that’s hard to forget. It has other names, too, including the Bahama Mama, the Jamaican Hot, the Bahamian, and the Martinique pepper.

Is the Scotch bonnet pepper spicy?

Yes! Very spicy. As mentioned, it’s very similar in spice to the habanero pepper, making it one of the hottest chili peppers in the world. Let’s give it a comparison to our jalapeño reference point. Scotch bonnets run between 100,000 to 350,000 Scoville heat units (SHU). The hottest possible Scotch bonnet is potentially 140 times spicier than the mildest jalapeño you may find (around 2,500 SHU). That’s a lot of heat.

This chili has a slightly sweet taste to it, sort of like a tomato with an slight hint of apples and cherries. It’s very closely related to the habanero, so if you’ve tasted a habanero you’ll have a decent idea of what a Scotch bonnet has in store for you in terms of heat. Just add in more sweetness.

This sweetness makes the Scotch bonnet a very popular chili for Caribbean cooking and hot sauces. It’s a really distinct sweet-heat flavor that a lot of people love.

Where can you buy Scotch bonnet?

If you love Caribbean foods and island cooking, we highly recommend our Scotch bonnet hot sauce. It’s impressive in its flavor, while its heat nearly rivals the hottest chilies in the world.